MWPA collaborates with partners and organizations to use the best and most current science and research available to prioritize projects and better adapt to wildfires.

Parcel-level data and modeling of potential scenarios has already been conducted as part of the Marin Community Wildfire Protection Plan (CWPP), a science-based assessment of wildfire hazards and threats to home in the wildland urban interface (WUI) of Marin County. Visit the 2020 CWPP Story Map to learn more.

Additional research and innovations developed by MWPA members, partners, and industry leaders can be found below. This page will be updated regularly to reflect the most recent, relevant science.

The Grasses and Grasslands of Marin and Sonoma Counties.
‍
Video: Temporal Trends in Wildlife Response to the 2017 Tubbs Fire at Pepperwood
‍
‍Determining The Ecological Effects of Fire Suppression, Fuels Treatment, And Wildlife Through Bird Monitoring in The Klamath Ecoregion of Southern Oregon and Northern California
‍
‍Habitat Characterization and House Usage of the Dusky-Footed Woodrat at Jasper Ridge. Stanford University.

‍Forest Management Effects on Abundance of Woodrats in Northern California

‍Habitat Selection by Northern Spotted Owls: The Consequences of Prey Selection and Distribution

Testing a basic assumption of shrubland fire management: how important is fuel age?

Modeling when, where, and how to manage a forest epidemic, motivated by sudden oak death in California. Proceedings of the National Academy of Sciences

Is your home protected from wildfire disaster? A homeowners’ guide to wildfire retrofit

‍‍Experimental investigations of firebrands: generation and ignition of fuel beds‍

Investigating the vulnerabilities of structures to ignition from a firebrand attack

‍What can we learn from the 14,000 homes lost during the Camp Fire?‍

A case study of a community affected by the Witch and Guejito fires. 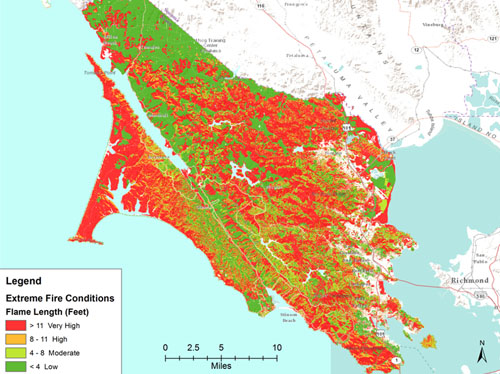